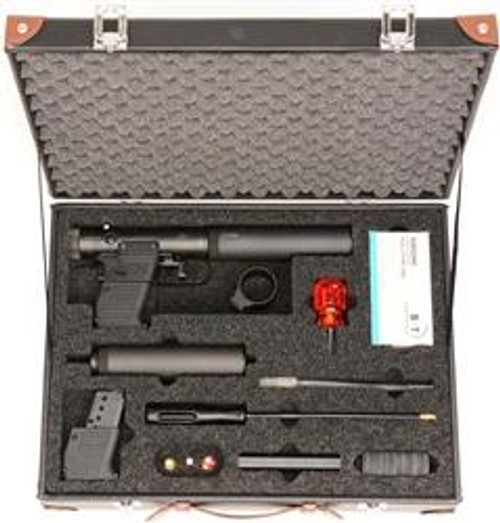 For the serious NFA collector

The VP9 has a ported barrel to slow supersonic ammo to subsonic velocities like an MP5SD - the Station Six does not. The VP9 also has a removable grip for easier concealment of the weapon and use of it in the form factor of a pipe.

These are part of a very small production of the Original VP9 design and I'm told they will never be made again for the US market. The kit includes the VP9 pistol along with two silencers - one wipe suppressor and one metal baffle suppressor. It also comes with a fitted briefcase and some other small accessories seen.

Something this unique and limited will only grow in value. We've been incredibly fortunate to source a couple of these very rare kits and don't expect to be able to get any more.

The kits are currently incoming on Form 3 and will arrive shortly.

B&T Magazine Clamps    For B&T magazines.  These will not fit Glock magazines.

Honey Badger SBR w/Silencer By Q Your new Personal Offensive Weapon. The original Honey Badger was developed at AAC by previous owner and Q CEO, Kevin Brittingham and his R&D team at the...

M-79 40MM Grenade Launcher Military M-79 Grenade launcher mfg with all military parts on a registered receiver.  This is a destructive device which can transfer out to any Class III dealer in...

1917 Lewis Gun Savage MFG In Caliber 30-06 comes with one drum.  Appears to be all original with bipod.

Heckler & Koch MP5SD 9mm Integrally Suppressed MP5SD in 9mm This Is The Fullsize MP5 That Has The Removable, Built In Suppressor. The Suppressor Was Mfg By RDTS, Mfg From All SS. These...