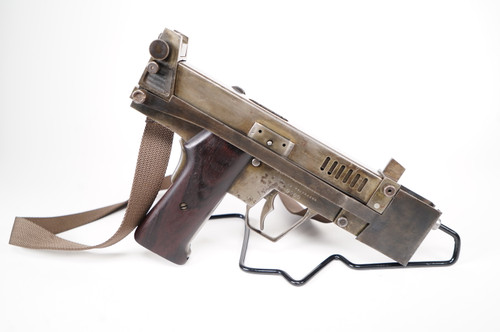 This is a 100% handmade Sub Machine Gun in 22lr from Nicaragua.  It was imported at some point after 1968 but before 1986 thus making it a presample.  It was featured by Ian McCullom of Forgotten Weapons fame a few years ago.This gun was completely gone over by Mike Friend of the Firing Line in Oklahoma and runs like a top.

Dead Air Suppressors Mask 22 lr Our .22 suppressor features a blend of titanium and 17-4 PH stainless steel construction for direct thread applications. What sets The Mask™ apart is its marvelous...

Uzi SMG in 9mm Pre-Sample This is a Pre-sample gun that is available only to dealers. IMI factory SMG, imported by Action Arms out of Philly.

GSL Technology STEN - 76 SMG Silencer The STEN / 76 Suppressor is designed to be one of the most efficient suppressors available for the STEN II and the Smith & Wesson M-76 submachine guns. This...

Allen Engineering  AEM5 22 Rifle Can   The AEM5 is the direct fit replacement for your MK12 SPR. The AEM5 attaches to the weapon via a mount(not included) and a collar that goes over the...

1917 Lewis Gun Savage MFG In Caliber 30-06 comes with one drum.  Appears to be all original with bipod.

REMINGTON R10 ERASR TUNISIAN CONTRACT   These Remington R10 ERASER's were made for the Tunisian government to be used for a squad sniping system competition next to the Knight's M110...

Yugoslavian M76 in 8mm This is Pre-sample gun that is available only to dealers.  This was imported after 1968, but before 1986, so it's transferable to FFL dealers with their SOT only. The...

Browning Hi Power Transferable Machine Pistol in 9mm This was registered by Barr Armsmaker.  It's a full auto---fully transferable---machine pistol.  For the discriminating collector who...

KALASHNIKOV USA (K-USA) KOMRAD The Kalashnikov USA Komrad is a non-NFA item – you can purchase it from your local Federal Firearms Dealer after completing the standard Form 4473.* This...

M-79 40MM Grenade Launcher Military M-79 Grenade launcher mfg with all military parts on a registered receiver.  This is a destructive device which can transfer out to any Class III dealer in...