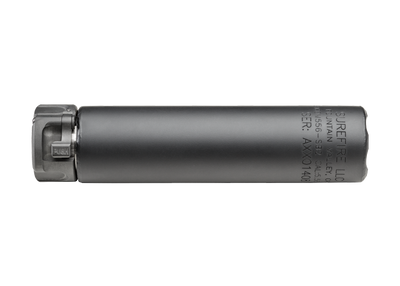 Originally released in 2012, the SOCOM Series Suppressors were selected by US Special Operations Command as first among all competitors, the most extensive and rigorous suppressor evaluation in history.

The SOCOM2 suppressors continue to be constructed of advanced high-temperature alloys and stainless steel featuring a redesigned internal venting system to additionally reduce back pressure and in some cases a further reduction in sound attenuation. Ascetically the visual difference of the SOCOM2 suppressors is a new recessed end cap.

There is no change in suppressor adapter attachment between the SOCOM and SOCOM2 suppressors. The SOCOM 3-Prong Flash Hider, Muzzle Brake and WARCOMP option adapters are designed for use with weapons system from carbine through machine gun variants. Like all SureFire SOCOM Fast-Attach models, the SOCOM2 produces minimal consistent shift in impact, if at all, compared to that of the unsuppressed weapon.

As always SureFire suppressors are designed and manufactured in the USA.

The compact and lightweight SureFire SOCOM556-SB Fast-Attach® suppressor is designed specifically for 5.56 rifles with barrels shorter than 10 inches, or longer barrels firing unstable ammunition (e.g. most jacketed frangible and “green” ammunition). It is a modified version of the SOCOM556RC, which was selected by US Special Operations Command as first among all competitors in the most extensive and rigorous suppressor evaluation in history, covering all aspects of suppressor performance, and which also received the USSOCOM official safety verification in support of fielding.

This product hasn't received any reviews yet. Be the first to review this product!

All prices are in USD. Copyright 2020 Only The Best Firearms. Sitemap | Shopping Cart Software by BigCommerce