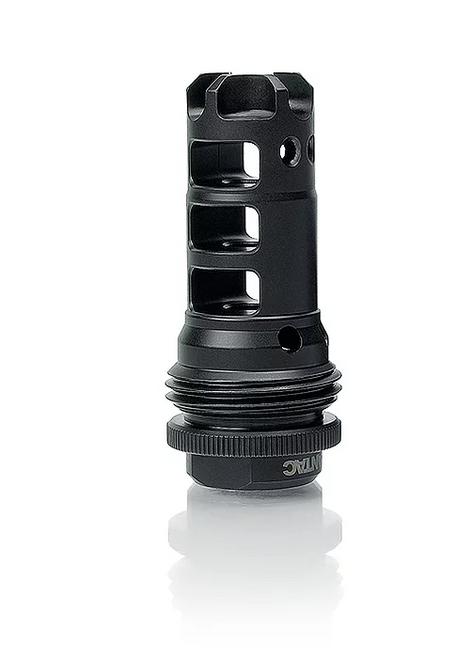 The DGN556B-ASR™ is precision machined, hardened to 48Rc and nitride finished for enhanced corrosion resistance.

It features their patented gas handling system that reduces muzzle rise and recoil to zero, meaning that the only recoil felt by the shooter is from the movement of the carrier and buffer within the buffer tube.

Its unique Short Energy Pulse system reduces length of recoil so that repeating shot energy cannot overlap and knock the shooter off target.

Full auto fire is possible with massively reduced recoil and muzzle climb, meaning that all shots fall on target.

They recommend the use of Rocksett thread locker that is not included.

Does NOT work with the BMD, Blast Mitigation Device.

Made in the USA.

Comes with appropriate timing shim set.
Made in the USA.

This product is manufactured in the USA by LANTAC USA LLC for sale within the USA only.
Export of the commodities described herein is strictly prohibited without a valid export license issued by the U.S. Department of State, Office of Defense Trade Controls, prescribed in the International Traffic in Arms Regulation (ITAR), Title 22, Code of Federal Regulations, Parts 120-130.

SilencerCo. - ASR MUZZLE BRAKE This 3-port muzzle brake is compatible with all SilencerCo ASR Mounts and with multiple thread and caliber options, you can shoot suppressed for any demand. It offers...

SilencerCo. - ASR MUZZLE BRAKE This 3-port muzzle brake is compatible with all SilencerCo ASR Mounts and with multiple thread and caliber options, you can shoot suppressed for any demand. It offers...

Dead Air Dead Air KEYMOUNT MUZZLE BRAKE  PRODUCT DETAILS The KeyMount Muzzle Brake is your gateway to silence. When you’re ready for peace and quiet use the KeyMount brake to quickly...

AWC Silencers THOR PSR XL .338 Suppressor Designed for elite military units, the THOR PSR over the muzzle brake suppressor was engineered by AWC in partnership with Surgeon Rifles. This...

Gear Head Works Tailhook Mod 1C Pistol Brace The Patented Tailhook MOD 1C is 30% lighter and 30% more compact than or standard Mod 1. With a profile similar to the SCW Tailhook it truly is the most...