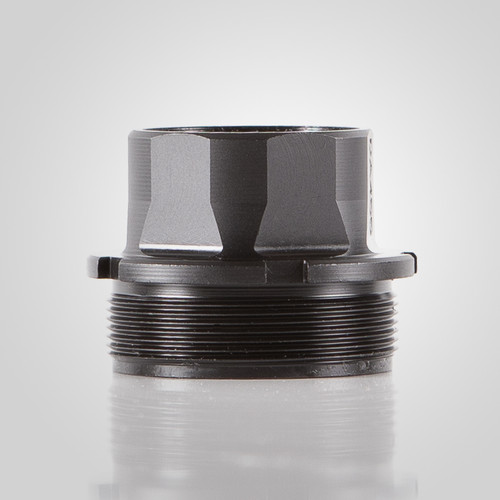 The Xeno Adapter is designed to work in conjunction with our Xeno Flash Hider or Xeno Brake. This pairing gives you a light weight suppressor mounting option with non-negotiable repeatability and a solid return to zero — ideal for precision minded shooters. Don’t worry, the Xeno Mount System still provides you hard core users the durability you’ve come to expect from Dead Air.
The shorter length and lock up positioning of the Xeno Mount System make it shine. How exactly? The Xeno Flash Hider doesn’t sit deep into the blast chamber. This minimizes focused erosion on your baffles, prolonging suppressor life, while maximizing sound performance.
The shortened length also supports a more future proof design with a heavy consideration for suppressors with smaller blast chambers across the industry. Plus, the Adapter uses the industry standard 1-3/8-24 threads, making it not only compatible with our Nomad series, but also many other silencers on the market.
The Xeno Flash Hider and Adapter attach together with left handed threads, eliminating your worries of the adapter unthreading from your silencer when removed. This also lets you verify your mount is still tight when installing on your firearm.
Both the Flash Hider and Adapter feature ample tooling surfaces, giving you plenty of room and options. These tool features are accessible even when your suppressor is completely installed. This is for you folks that don’t remove your silencer for hundreds or thousands of rounds fired and may need that extra “torque.”
Our material of choice is nitrided 4140 steel for hardness and corrosion resistance. The bonus is that it won’t gall your threads as is common with the uncoated 17-4 products out there. It’s no fun having your mount drilled from the back of your suppressor while you’re biting your nails hoping it can be salvaged. Nitrided 4140 is just tough. Scouring off carbon and copper deposits is not only easier, you’re less likely to damage your threads.
For those desiring a mounting system that offers insane repeatability and durability, with very little length added to your silencer, the Xeno is what you’re after.
Xeno Flash Hider or Xeno Brake and Adapter sold separately

Dead Air Odessa-9 9mm Suppressor There are things we didn’t like about the current choices of handgun silencers. And you probably have the same gripes. Most of us have lived with these problems,...

Dead Air Omega KEYMICRO ADAPTER for Micro Break Omega to Dead Air Muzzle Device If you're one of the many owners of a SilencerCo(R) Omega and have ever longed for a simpler and more reliable mount,...

Dead Air Dead Air KEYMOUNT MUZZLE BRAKE  PRODUCT DETAILS The KeyMount Muzzle Brake is your gateway to silence. When you’re ready for peace and quiet use the KeyMount brake to quickly...

10-8 Performance 1911 Slide Stop, Gen 2 Product Description Our second generation slide stop is an all original design that is totally reengineered to provide you a whole new level of...

1950 Madsen M/50 9mm This is a Pre-sample gun that is available only to dealers.  Complete factory gun chambered in 9x19mm. Comes with one magazine and factory sling.    *** SOLD...